A wounded Eli identifies the D'Alessio brothers as the men who robbed the casino and shot him. On the boardwalk, Margaret talks to Warren Harding's mistress, Nan Britton, whom Nucky has brought along from Chicago. Nan explains how she and Warren met and how, in order for him to win the presidential election, he cannot support her and their child.

Margaret and Nan go to Madame Jeunet's to buy a dress for Nan. Madame Jeunet asks Margaret to persuade Nucky to reduce the exorbitant rent he charges. At first, Margaret broaches the issue directly, but this only angers Nucky. Taking a different approach, she then tells Nucky she is worried about not looking good for him if Madame Jeunet leaves. This works, and when Madame Jeunet gratefully offers Margaret a dress for her daughter, Margaret instead uses her newly found influence to get a more expensive dress for herself.

As he comes to work, Nucky is surprised to find Jimmy, who claims to have sent a telegram. He agrees to Nucky's offer, on the condition that Nucky also employ Richard Harrow and keep their work a secret. Nucky shows Jimmy mug shots of the D'Alessio brothers, implying that he wants them dead; Jimmy notes that Nucky still avoids giving such orders directly, teasing him as "a politician to the last". In New York, Arnold Rothstein plots to seize control of Atlantic City and its seaborne trade in high-quality alcohol. He meets the D'Alessio brothers and hires them to kill Nucky. To hedge his "bet" on the hit, Rothstein has his new business partners sign life insurance policies with himself as the beneficiary.

Angela is at home, drinking with Robert and Mary Dittrich. Robert, who clearly knows about Angela and Mary's relationship, tries to initiate a threesome. The Dittrichs leave when Jimmy arrives unexpectedly; Angela claims she never received his telegram. Jimmy forcefully kisses Angela and the two eventually have sex on the kitchen table. The next morning, Jimmy announces that with his new job, they can and should have a second child. Angela later visits the Dittrich studio, where Robert coolly informs her that his art dealer friend is no longer interested in Angela's work, which he derides as "a cheap imitation of Mary Cassatt".

Jimmy's telegrams are being intercepted by the federal agents in the post office. Van Alden is furious at Agent Sebso for misplacing the telegram sent to Nucky, which would have enabled them to arrest Jimmy as he arrived from Chicago. Van Alden plans to use Jimmy's guilt in the truck heist to coerce his testimony against Nucky's corruption. Meanwhile, Jimmy visits his mother Gillian's apartment, where she has Lucky Luciano fooled and unarmed in bed. Before Jimmy can take Luciano away, Van Alden arrives to arrest Jimmy. He denies involvement in the truck heist, but in jail sees his old accomplice Billy Winslow, whom he thinks may have confessed. Nucky comes to Jimmy's cell and learns of Rothstein's alliance with the D'Alessios. He refuses to buy Jimmy a lawyer but promises to help in another way. Agent Sebso convinces Van Alden to let him take Winslow, who has indeed confessed, away from Thompson and Atlantic City's crooked police. Along the way, Sebso reveals his own corruption, killing Winslow and wounding himself to fake an escape attempt.

Nucky meets with the mayor and Deputy Halloran, Eli's second-in-command, who informs Nucky that Eli's recovery has been delayed for another month and asks to be appointed acting sheriff. When Nucky approves, Halloran further suggests that he should replace Eli permanently in the coming election, citing Eli's poor health and growing public awareness of his corruption. Nucky's mentor and predecessor, Commodore Kaestner, recommends that Eli and the mayor be dropped from the ballot, warning Nucky the election will be tough.

Nucky and Margaret dine at Babette's with local businessman Edward Bader and his wife. Nucky asks Bader to run for mayor, explaining that he is dropping his support for the weak incumbent. Out on the boardwalk after dinner, Nucky and Margaret are ambushed by an assassin. Nucky's butler Eddie tackles the shooter, who hits an innocent woman instead. The assassin flees, although Eddie shoots him in the leg. 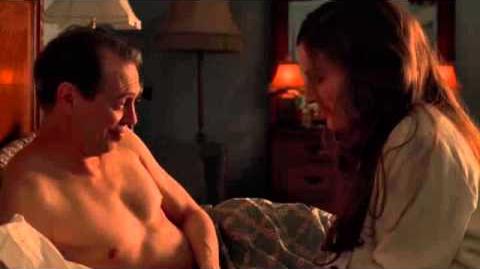 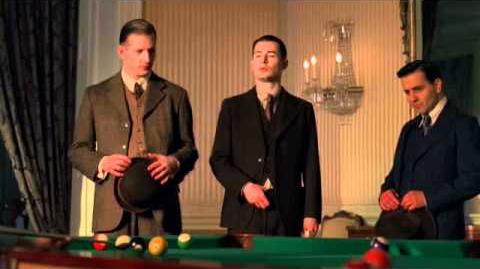 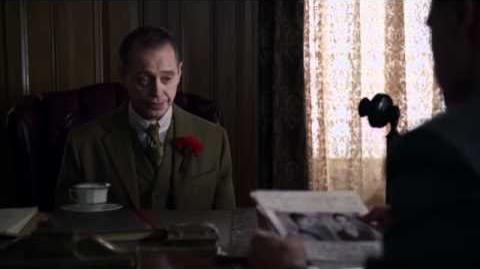 IGN gave the episode a score of 9 calling it "Outstanding" saying "I've never chatted about any television series around a watercooler. But if I lived anywhere near a time when that really happened, pretty sure Boardwalk Empire's "Belle Femme" would be the topic of discussion. And if you're one of the few out there not watching, then you're missing out on some great conversation."[2]