"Cuanto" is the fourth episode of the fifth season of Boardwalk Empire, and the 52nd episode overall. It was co-written by Executive Producer Howard Korder, Executive Story Editor Cristine Chambers & series creator and Executive Producer Terence Winter and helmed by returning director Jake Paltrow. It first aired on September 28th, 2014

Nucky Thompson is forced to remain in Atlantic City when heavy rain prevents him flying to Cuba. He spends the time reconnecting with his wife, Margaret. Flashbacks to his childhood in 1884 follow him introducing his brother to the wealthy tourist lifestyle he briefly observed while working for the Commodore before his summer job ended. Nucky and Eli are caught trespassing in a room at the Corner Hotel by Sheriff Lindsay. He takes pity on them and brings them home for a meal with his family. While Nucky is out of the country political unrest in Cuba grows and Sally Wheet runs afoul of the military while looking after Nucky's interests.

Al Capone flaunts his notoriety when Charlie Luciano visits Chicago to propose a criminal coalition. Luciano recognises Nelson Van Alden and exposes his identity but Van Alden convinces Capone to spare his life. Luciano's visit frustrates Capone and he brutally murders a subordinate shortly after Luciano leaves, then calls Nucky to warn him that Luciano is a threat.

Directed by Jake Paltrow (“Young Ones”), this episode of “Boardwalk Empire” elegantly unfurls the flashback’s of Nucky’s youth and there’s a lot of nuance and sweetness throughout the episode. As the young Enoch (Marc Pickering) awakens to his surroundings —the wealth, the privilege, the status— he is summarily laid off. Summer’s over, the tourists are leaving the Boardwalk and there’s no reason to keep on a boy paid to sweep up their mess. “Don’t enter a room like a question mark,” the Commodore (John Ellison Conlee) scowls at Enoch’s meek bearing. The boy is getting life lessons everyday about how the world works, and through the Commodore’s actions, we bear witness in reverse to Nucky Thompson becoming the man he is and where he got his outlook on life.

The Commodore keeps the boy on his toes. When he tells him the job is over, he asks Nucky derisively, “Are you going to cry?” It’s not so much a question as it is the Commodore saying, “this is how the world works, kid, and crying about it is for suckers.” Later on, Nucky beats up his little brother Eli after he finds him spying on his parents having sex. But it’s really just Nucky trying to impart what he’s learned.”You don’t know how people live,” he says, implying to Eli that they need to grow up and figure out the world fast before they are stuck in their poverty-stricken circumstances. Later, in a fit of pique and bitter about losing his job, Enoch and Eli break into the hotel, and use many of the luxuries otherwise unavailable to them.

Of course, they’re found out by Sheriff Lindsay (Boris McGiver), but he takes pity on Nucky and invites him over for dinner. Nucky breaks down and cries during the middle of the meal, a seemingly strange and quiet moment. But we realize this is the first time Nucky’s witnessed how a civilized, loving family breaks bread together. And we’re soon seeing the roots of Nucky’s elemental desires; to move up in the world, not for money, but to avoid the harsh narrative of life. We’ve already seen the young boy shifting allegiances away from his father to the Commodore and the Sheriff, and this appears to be the moment of truth that will define his life going forward.

Speaking of modifying things: “Change is gonna come” says Charlie “Lucky” Luciano (Vincent Piazza) in a sales pitch shortly after arriving in Chicago. Luciano and Meyer Lansky are obviously making planning for a coup d’état, so Luciano turns up in Chi-town to appeal to Al Capone (Stephen Graham). Without fully disclosing his plan, the young gangster alludes to the fact that he’ll soon be controlling the East Coast, and that since they’re Italians and all,  he suggests that Capone should join forces with them. What about Nucky Thompson (Steven Buscemi) who rules Atlantic City? Luciano intimates that it’ll be taken care, and Ralph Capone (Domenick Lombardozzi) and his older brother exchange a look.

But shit is about to hit the fan for Nelson Van Alden, aka George Mueller (Michael Shannon), one of Capone’s thugs. While Luciano tries to sells Capone on the future, he’s got a funny feeling. He’s seen a familiar face —Mueller— but he can’t place him. Eventually the gangster’s memory is jogged: Lucky got pinched by Mueller in the early seasons of ‘Boardwalk’ when Mueller was Nelson Van Alden, an FBI agent. Luciano suddenly makes a stink; Capone humors him and the next thing you know Mueller’s sucking on the end of the mobster’s pistol. But Mueller somehow avoids his demise, shitting his pants and sticking to his story. In fact, his saving grace is appealing to Capone’s ego: who the hell is this Luciano kid that he comes into Capone’s office and claims there’s a rat in his house? It takes balls, as does lying with a gun in your face, but the ruse works, Capone settles and Luciano backs down like it was all just his mistake.

But there’s a ripple effect. Mueller’s words have echoed deeply within the hubris-filled, cocaine-addled and irate Capone. Not only does Capone call Nucky to tell him of Luciano’s plans (which of course he already knows), he beats one of his annoying goons to death, just to blow off the steam Luciano’s arrogance has helped boil. Meanwhile, there is a Fed rat in Capone’s crew, Mike D’Angelo (Louis Cancelmi), and he’s soaking up Luciano’s plans with rapt attention. Later, digging through files, he discovers Muller’s true identity as an ex-federal agent.

As was already suggested last episode, Joseph Kennedy (Matt Letscher) won’t have anything to do with Nucky or his business, and drives all the way to Atlantic City to tell him what is obvious. Worse, he flirts with Nucky’s estranged wife Margaret Schroeder Thompson (Kelly Macdonald) who’s come to Nucky to tell him about their problem, detailed in the last episode. Nucky says he has “the solution,” which Margaret takes to be something sinister and they bicker culminating with Margaret calling him a bastard. Over dinner, things go over smoother and there’s palpable affection in the air. Nucky’s a little proud of her for shaking down Arnold Rothstein. Margaret gets drunk over dinner and the duo wistfully go down memory lane with a few jabs in at each along the way.

But the animosity between them is in the past and what’s left is tenderness; a lingering connection that we can still feel between them. Later, on the Boardwalk as they are saying their goodbyes, Margaret kisses Nucky. It’s a bittersweet moment that could lead to more involved interaction, but the slightly more sober Nucky calls it a night and sends her to a nearby hotel, much to her disappointment.

In Havana, a Cuban uprising takes a turn for the worse. While interacting with a local businessman, Sally Wheet (Patricia Arquette) notices something is up. There’s unrest in the air, and suddenly this man is packing his bags. Before she can decide what to do, or to get in touch with Nucky to tell him the situation, Wheet is stopped by armed guards and is told there’s now a curfew in effect, and they ask what is she doing out after dark. She protests she was unaware and tries to use her Southern charms to get her out of the bind, but it doesn’t work. When she resorts to a bribe, the captain of the guards is incensed. “You’re what’s wrong with Cuba,” he seethes. During a frisk, the soldiers find her pistol hidden in her garter strap. She goes for it, which turns into a brief standoff that ends tragically for her. The Captain knows this could get ugly and orders they drag her body away.

Nucky’s flight to Havana was delayed at the beginning of the episode due to weather, but we’ll assume he’ll be flying down their pronto when he finds out what happened to Wheet. But with the military rising in power, it’s unlikely even a wealthy gringo will be able to do much about it. Moreover, if the military do take over, Nucky’s investment in Bacardi Rum might end up being moot. 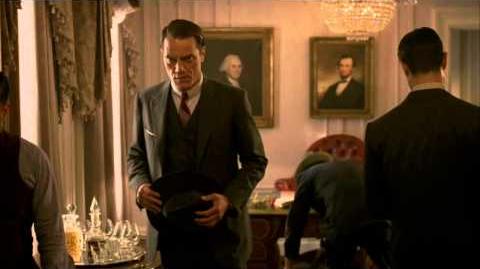 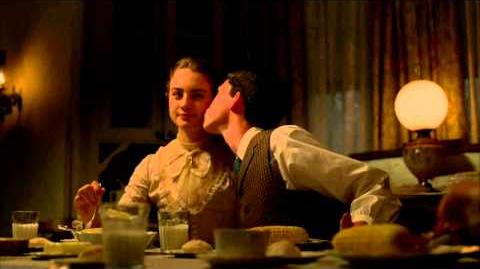