"Ging Gang Goolie" is the sixth episode of the third season of Boardwalk Empire. It is the 30th episode of the series overall. It was written by co-producer Steve Kornacki and directed by Ed Bianchi. It premiered on 21 October 2012. This episode is set in March, 1923.

A fire in the Greenhouse of the Thompson residence draws Owen Sleater and Margaret Thompson back into close proximity. Margaret suspects Teddy given his history of playing with matches and her fears appear to be confirmed when her neighbor catches him in her garage with matches and kerosene. Owen claims to have found and punished a vagrant who was responsible. Margaret confesses her fears to Owen and then re-initiates their affair. Nucky Thompson travels to the Hotel Astor in New York to deliver a payoff and is perturbed when Gaston Means is not at the agreed place. He travels to Washington D.C. to confront Harry Daugherty about his crumbling operation and deduces that Daugherty is intending to make him a scapegoat. Daugherty has Nucky arrested on a trivial charge and he is imprisoned before a hearing at night court. Esther Randolph is the prosecutor but is unable to convince the judge to apply anything other than the standard $5 fine. Nucky suggest that he and Randolph work together against Daugherty, promising her a career case. Means later calls Nucky and offers to facilitate his plan with an introduction. Richard Harrow connects with embittered veteran Paul Sagorsky and his daughter Julia. Gillian Darmody feuds with her business partner Lucky Luciano over his heroin operation. She seduces Roger McAllister, a young man who reminds her of Jimmy.

After being detained in Washington by Daugherty's henchmen, Nucky approaches his onetime nemesis, Esther Randolph, and later entertains an intriguing proposition from Gaston Means. In Atlantic City, Margaret copes with Teddy's demons while Owen investigates a suspicious fire, and Gillian feuds with Lucky and finds a surrogate for Jimmy. Richard connects with a pugilistic vet named Paul Sagorsky and his daughter, Julia. (Showtime Australia)

Margaret Thompson awakens to the sound of breaking glass to find Teddy waiting at the foot of her bed. He tells her that there is a fire in the greenhouse. Owen Sleater arrives to check the grounds and clean up the debris. Cornelia Predock comes over from next door to comfort Margaret and fusses about being seen in her nightgown. Owen tells Margaret that there is no sign of whoever lit the fire but that it burned quickly. Owen takes Margaret and Teddy inside to question the boy about what he saw. Teddy says that he was there when the fire started and blames it on a gypsy man. Margaret sends him to bed and Owen flirts with her, saying that it could have been the pooka, an Irish folk legend. Teddy listens to their conversation from the top of the stairs.

The next day Margaret helps Teddy learn his letters but finds him distracted by the debris. She tries to reassure him that the danger has passed and finds that he is fixated on Nucky Thompson's absence. He says that the man would not have started the fire if his father was home. He also asks her if Owen can live with them.

Margaret reads Margaret Sanger's birth control review and is interrupted by her maid Prudence, who announces Cornelia Predock. Margaret jokes that Cornelia does not realize that Owen does not live at the house and goes to meet her. She finds her with Teddy and Cornelia explains that she caught him in her garage with matches and kerosene. Cornelia says that she hates busy bodies and leaves Margaret to deal with her son, offering a sympathetic ear if she needs one. Margaret questions what Teddy was doing and he again tries to blame a gypsy, but has no satisfactory explanation for the kerosene. Margaret spanks him halfheartedly and sends him to his room.

Eli Thompson and Mickey Doyle drive out to Tabor Heights, New Jersey to question Sheriff Ramsey in the aftermath of the shootings at the Kinneret Lodge. Ramsey pleads ignorance of Gyp's plan to massacre their convoy and steal their liquor. He tells them that State Police Superintendent Norman Schwarzkopf came to investigate and that Gyp Rosetti has fled the town. Eli and Mickey are disappointed to learn that none of the liquor Rosetti stole is still in town. Eli warns Ramsey that he will come for him if he does not let them know the moment he sees Gyp.

Lucky Luciano comes to Atlantic City and stays at The Artemis Club. He sleeps with one of the prostitutes, Gwynne, and tries to recruit her as a heroin dealer. Gillian Darmody barges in and fires Gwynne, trying to maintain the high end status of her brothel. She asserts that it is her house and he says that he thought it belonged to Jimmy, throwing her. Later, she cleans away all the photos of Jimmy from the house.

She heads out to the boardwalk and approaches a young man who resembles Jimmy. She offers him a cigarette and flirts with him before going back to his boarding house. They have sex and afterwards she tells him that she is going to call him James, explaining that it is the name of a king.

Richard Harrow attends an American Legion (AL) meeting where World War I veterans air their disappointment over the lack of financial support for the disabilities they incurred fighting for their country. An embittered older veteran of the Philippine-American War, Paul Sagorsky, mocks the younger soldiers and gets a rise from the bartender Tuckman. Sagorsky agrees to fight Tuckman at the next AL amateur boxing night. Richard returns to watch the bare knuckle boxing bout. Tuckman knocks Sagorsky out but the older man puts up a spirited fight. Richard looks after him as he recovers on the steps outside, waiting for his daughter Julia to pick him up. Richard is entranced by the pretty and intelligent young woman. As she drives her father away he notices that they forgot his coat. He picks it up and a medal falls out of the pocket.

Richard finds the Sagorsky residence to return the coat and medal. Julia does not invite him in but apologizes, blaming her father's mood. She tells him that the medal was awarded to her brother Fred who was killed fighting in World War I. She asks Richard about his own family and he tells her about his sister Emma. He says that they are close. That night he looks through photographs of himself with Emma before the war.

Nucky visits the Hotel Astor in New York City to make his payoff to Gaston Means. He finds the suite empty, and the goldfish bowl full of water instead of the usual cash. A maid tells him that the last guest was a French woman and has already checked out. George Remus arrives and tries to contact Means using the suite's phone. The maid tells him that the phone is for guests only and threatens to call the hotel detective. Nucky suggests that Remus use the lobby phone and tips the maid, apologizing for Remus.

Means is in Washington, DC with Attorney General Harry Daugherty. Daugherty is addressing the Boy Scouts of America at a conference. He tells the story of the Honest Indian and his aide Jess Smith suffers a public breakdown, distraught at their theft and corruption. Means hustles him out of the room to save face as the scouts begin to sing "Ging Gang Goolie."

Nucky takes a train to Washington and goes straight to see Daugherty. He barges in on him in conference with Smith and Remus. Daugherty protests that it is a private meeting and Nucky asserts that he has just begun another one. Nucky is concerned about Daugherty's disorganization and deduces that he is plotting to scapegoat a bootlegger to repair his damaged reputation. Nucky realizes that he is Daugherty's target and warns him not to proceed. Daugherty feigns ignorance and Nucky leaves, angry. Means emerges from the next room and Daugherty asks him to teach Nucky a lesson in civics.

As Nucky goes to board his return train he buys a pint of whiskey from a vendor in the station. He is apprehended by a duo of Justice Department agents who are careful to mention that Daugherty sent them as they arrest him for the minor Volstead Act violation. Nucky is taken to a holding cell and kept there for eighteen hours without a phone call. He complains to one of his fellow prisoners about the treatment. The man introduces himself as Alby Gold and confides that he is a bootlegger with a still in his basement. Nucky is amused by Gold's lack of ambition.

Nucky is eventually brought before a judge at night court. Esther Randolph is the prosecutor and she is shocked to see him there. She pushes for a heavy sentence for the misdemeanor but the judge refuses to impose more than the usual five dollar fine. Nucky pays the court clerk with a $100 bill. He waits for Randolph outside the court room and invites her to breakfast, promising that it will be interesting. During the meal he proposes an alliance against Daugherty. He argues that the Attorney General has stalled her career for losing the case against him when Daugherty never intended her to succeed. He promises to get her out of night duty if she works with him to expose Daugherty's corruption. She says that President Harding will never turn against Daugherty but Nucky is confident he can find someone with higher authority.

Owen visits Margaret to tell her that he has found and "taken care of" the vagrant who had been breaking into gardens in the area. She is surprised that there was anyone matching Teddy's description and wonders if Owen is lying to calm her down. Later, Nucky calls Margaret from the station to say that he has been worried about her. She tells him that they need to talk about the state of their marriage. She lies to Gareth Murray, the guard Owen has posted at the house, and tells him that Nucky said that he can leave.

Nucky goes to Billie's apartment and lets himself in. When she arrives she gently rebukes him for missing the opening night of her play. He says that she would not believe where he has been and asks how it went. She recites a positive review from memory and says that she has been getting interest from film agents. The phone rings and Nucky answers, annoying her. It proves to be Means calling for him. Means offers to put Nucky in touch with someone who can aid him against Daugherty in exchange for the protection money Nucky had been paying Daugherty. Nucky invites Means to Atlantic City and then tells Billie that the call was nothing worth discussing with her.

Teddy tells Emily about the Gypsy man, embelishing the story with details he overheard from Margaret and Owen discussing the Pooka legend. He shows her a knife he keeps under his pillow and promises to protect her. Margaret is disturbed by a noise in the greenhouse. She calls Katy looking for Owen, but Katy tells her that Owen is out. Margaret fetches and loads a shotgun from her closet. She goes outside to investigate and finds that it is Owen, checking the greenhouse again. She confides that she thought Teddy was responsible for the fires and wonders where she has gone wrong. He reassures her that those questions are best left until morning and makes to leave. She stops him and kisses him. He worries that it is dangerous to re-initiate their affair and she counters that they both know how to keep a secret. She leads him into the greenhouse where they undress between passionate kisses. 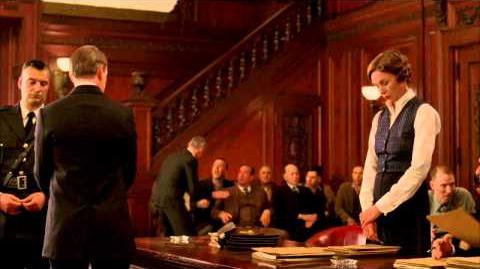 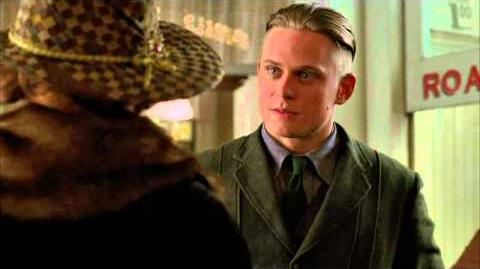 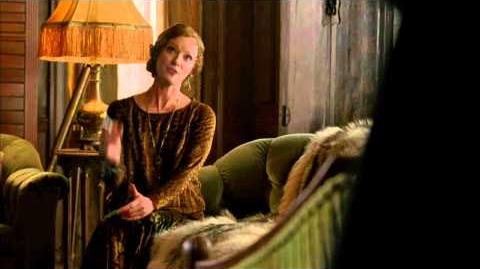