"King of Norway" is the fifth episode of the fifth season of Boardwalk Empire, and the 53rd episode overall. It was written by Steve Kornacki and helmed by regular director Ed Bianchi. It first aired on October 5th, 2014

Chalky returns to Atlantic City with vengeance on his mind. Concerned about the ongoing threat from Luciano , Nucky arranges a meeting with Maranzano in New York. In Chicago, Eli's reunion with June takes an unexpected turn after a dinner party hosted by Van Alden and Sigrid . Capone looks to relocate his operation out of Chicago; Margaret completes a deal with Carolyn Rothstein ; Nucky gets bad news from Cuba. In 1897, young Nucky looks to win over Mabel's father while asking for expanded responsibilities as deputy sheriff.

“Boardwalk Empire” will be slow and graceful to the end, With only three episodes left, the show feels as if long candle-wicks lit long ago are now traveling down to what likely will be an explosive conclusion. Or at least that’s the paradigm of Terence Winter’s show thus far. I’m not sure now is the time to surprise us, but ‘Boardwalk’ hasn’t really deigned to speed up its pace in its final, shortened season.

Like this season’s narrative, which jumped ahead seven years, Nucky’s flashbacks have also jumped forward in time. Young Enoch Thompson is no longer a boy. He’s a young man who intends to marry his girlfriend Mabel. He’s a deputy Sherriff under Sheriff Lindsay (Boris McIver), and he’s beyond learning the ways of the world as he was when we last saw him, as a child. These flashbacks —prequels as it were, explaining how Nucky became the calculated mobster he’s come— are now in the motivation phase. He’s not yet power hungry, but his ambition is beginning to show. For one, he’s asking the Sherriff if he can join in on his “special missions,” ones ordered by the Commodore when troublesome men disappear. Aghast at Enoch bringing it up at his home, in the middle of the night no less, he quickly says they’ll discuss at another time. Meanwhile, Nucky’s desires are also spilling over into his romantic life. He tells Mabel’s father, a refined man who doesn’t think much of Nucky, that he intends to marry and provide for his daughter.

Back in present day, Nucky’s (Steve Buscemi) troubles with “Lucky” Luciano (Vincent Piazza) are still of much concern, especially after Al Capone (Stephen Graham) called to say the young buck is actively gunning for him, despite a truce that was brokered a few episodes back with the Italian mob. So he seeks counsel once again with ex-Chicago mob boss Johnny Torrio (Greg Antonacci). The old man once again gives him advice, stressing that Nucky should retire and says he’ll join him for the meeting with the Italian mob boss Salvatore Maranzano (Giampiero Judica) to discuss Luciano.

Before this goes down, Nucky gets a visit from an old friend, Chalky White (Michael K. Williams), who has returned to Atlantic City with revenge on his mind. Nucky tries to talk his old pal down, noting that going after his nemesis Narcisse (Jeffrey Wright) won’t do anyone any good, but Chalky’s not really having it. Things ended poorly between Chalky and Nucky some seven years ago, with the former not sure if he was sold down the river. Even though that’s not the case, Nucky wants to set things right. As a show of good faith —and in what also appears to be an demonstration of genuine friendship— Nucky offers Chalky shelter and protection free of charge. He also offers him a wad of bills to keep him afloat. And when the FBI all of a sudden crashes the party, evidently having received word of Chalky sightings in the area, Mickey Doyle (Paul Sparks) keeps him safe.

Meanwhile, things go hinky during the Marazano meet. Or rather, they go according to plan for the other side… almost. Johnny Torrio (Greg Antonacci) is a no-show, and while Nucky and Marazano do a repeat of the meeting they’ve already had —which seems to test the Italian’s patience—  assassins suddenly attack. The bar is showered with bullets and then glass, guards are cut to ribbons, but the two main mobsters escape with their lives.

Back at the hotel, the obvious culprits are by the phone waiting to hear how the hit went down: Luciano, Meyer Lansky (Anatol Yusef) and Torrio. The phone rings, but it’s not one of their men with good news. It’s Nucky, who doesn’t fall for Torrio’s faux-concern. Nucky throws down, seething, “I will not rest into I see you in your graves.”

Meanwhile in Chicago, George Mueller’s (Michael Shannon) situation is about to get really volatile. Trying to cut off their problems at the pass, Mueller and Eli Thompson (Shea Whigham) discuss their options. While Mueller dodged a bullet, literally, the idea of the thug as snitch is in the air. He’s of the opinion that Capone and his men will eventually find out. If they do, they’ll likely be able to tie Mueller to Eli, who also knows about his ex-FBI past and has stayed silent for the greater good. Trying to figure out the next move, Mueller and his estranged wife Sigrid (Christiane Seidel) invite Eli over for dinner, but this time with his wife June (Nisi Sturgis), who has rendezvoused from New Jersey for their semi annual reunion. And she has big news: she’s seven months pregnant, having decided to not burden her husband with the news any earlier. Dinner doesn’t go well, and Eli comes across a stunning revelation as he spots a Norwegian banner that he’s seen once before: in one of his drunken blackouts, he sought a prostitute and one of them in the past was Sigrid. Contemptuous of her life and everyone in it, Sigrid spells it out for everyone as June goes ballistic. But before it all sinks in and everyone explodes, Mike D’Angelo (Louis Cancelmi) —Capone’s lieutenant who is actually an uncover FBI agent— stops by for an unexpected visit and things go from bad to worse.

D’Angelo and the Feds know exactly about both men’s checkered past, their true identities, and if inform them that if they don’t cooperate, they’re done. They’re screwed either way, but at least there’s a deal on the table. They break it down: Chicago law enforcement and lawmakers are too deep in the pockets of Capone to be effective. The best play is tax evasion —no one, not even Capone can escape the wrath of the IRS. So the plan is for Mueller and Eli sneak into Capone’s office and get the gangster’s record books… or else.

Back in New Jersey as Nucky licks his wounds and prepares for war, he gets an unfortunate update of his business in Cuba. He’s informed that Sally Wheet (Patricia Arquette) was killed by the Cuban army. Incensed, Nucky wants to know who did it. His business partner on the other line tells him sadly that’s not the way it will work. Nucky inquiries about who will be accountable, an ironic request and demand for justice from a mobster who has gone unaccountable for myriad crimes over the years.

Lastly, Chalky White heads half-cocked up to Harlem with a pistol and vengeance on the brain. As he gets to Narcisse’s whorehouse, ready to draw first blood, he’s shocked by who he finds: his old lover Daughter Maitland (Margot Bingham).

— Appearing confident and like her old self again, Margaret Thompson (Kelly MacDonald) completes a deal with Carolyn Rothstein, much to her chagrin. And even in these brief scenes, she asserts her power over Rothstein who had her over a barrel two episodes ago.

— The coked up and paranoid Capone is looking to relocate his operation out of Chicago. He’s keyed up and mistrustful of everyone.

— Still in a psychiatric ward after pleading temporary insanity seven years ago for the murder of the Jimmy Darmody lookalike, Gillian Darmody (Gretchen Mol) is no closer to getting out. Seemingly getting more claustrophobic, she makes her case to the chief doctor that she’s “cured,” but it doesn’t do much good. Meanwhile, is she ever going to factor into the main narrative? Maybe the letter Nucky received a few episodes back was from Gillian? If so, they cannot draw this out much further, because right now her character is feeling a little superfluous. 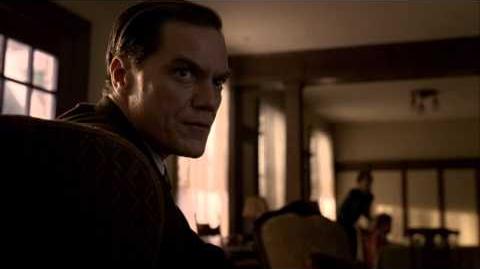