"What Jesus Said" is the third episode of the fifth season of Boardwalk Empire, and the 51st episode overall. It was written by Executive Story Editor Cristine Chambers and Executive Producer Howard Korder and helmed by regular director Ed Bianchi. It first aired on September 21st, 2014.

Margaret finds herself in a pickle due to her dealings with the late Arnold Rothstein when his widow starts snooping around his affairs. Meanwhile, Chalky wonders where his latest partnership is going; Nucky talks shop with a prominent businessman from Boston; Luciano and Siegel try to strike a deal with Narcisse in Harlem; and in 1884, a young Nucky works hard at the hotel and catches the eye of a girl who's vacationing with her parents.

“There’s forgiveness for everyone. That’s what Jesus said,” an innocent girl held at gunpoint says to on-the-run convict Chalky White (Michael Kenneth Williams) trying to appeal to his sense of goodness. “Baby girl,” Chalky solemnly purrs, “Jesus was wrong.” It’s come to this for Chalky, the former Atlantic City club owner, family man and gangster: in trying to seek refuge he’s been forced to hold a family hostage while he and Milton, his jailbird partner, are on the lam. But as much as Chalky is beyond redemption—he’s responsible for the death of his daughter Maybelle and he’ll never forgive himself—and as much as he’s a former shadow of himself, the former gangster’s got a code and a humanity within himself. Perhaps some kind of absolution will be Chalky’s salvation in this final season of “Boardwalk Empire.”

It becomes clear early on that Chalky’s young buck partner Milton is angry, volatile and unpredictable. As much as Chalky thinks they’re alike, they are not. When push comes to shove and Milton begins to abuse the women they’ve had to hold hostage, Chalky puts a hammer in his head, putting him down like a dog that couldn’t be controlled. These tough women now have the guns, but knowing Chalky did the right thing, they send him on his way. Maybe Chalky will finally settle some scores because Dr. Valentin Narcisse (Jeffrey Wright) is still lurking about Harlem.

Or rather, he’s fully running Harlem once more. Whatever happened to Narcisse and the FBI at the end of season 4, it’s been seemingly resolved (or at least we haven’t heard what the outcome was). Narcisse is back to controlling the territory with drugs and whores, and perhaps he did continue to rat out Marcus Garveyand other dissidents the FBI deemed to be threats to national security. Narcisse is paid a visit by Lucky Luciano (Vincent Piazza) and Bugsy Siegel (Michael Zegen) and they’re not really here to mince words: the new Italian boss Maranzano (Giampiero Judica), wants a cut of the Harlem’s riches. “Holding on to what you have. That sounds like a good idea,” Luciano hisses with a not-so-veiled threat. “For protection” of course, in case, god forbid, anything should happen. Never one to easily intimidate, Narcisse waves them both off dismissively, but later that night one of his cat houses is stormed and Siegel and his men make a bloody mess of it all.

“Boy!” These are the screams that echo through Nucky Thompson’s (Steve Buscemi) memory, perhaps as a reminder as to how far he’s come. In Thompson’s flashbacks—now an accepted, thematic element of the show—the mobster recalls acting as errand boy fetching whatever the patrons of hotels commanded. And he’s learning how the corrupt world works, even at the cost of his own innocence. “What would you do for love?” one enamored hotel guest asks the young Enoch (Marc Pickering). While delivering fresh flowers to the same visitor, the Nucky stumbles upon a young, bloody and beaten girl; the same belle the man had avowed his affections for in front of the young boy. He then sees how The Commodore and his right hand man administer their own justice. “This is between us,” The Sherriff (Boris McGiver) sneers, the first of many lies and secrets that Thompson has to keep over the years. Scripture seems to be on everyone’s mind in this episode as well. “Enoch walked with God, and he was no more,” says a young Mabel, a girl that Nucky himself is enamored with. She’s the young thing that would grow up to be Nucky’s first wife. Enoch says it doesn’t make sense and Mabel counters, “It doesn’t have to make sense—it’s the Bible.”

In present day, Nucky meets with Joe Kennedy (Matt Letscher), the righteous, but corrupt businessman and government official from last episode. A pious man, with his own sense of logic and the law—believing he is above it of course—Nucky’s desperate to please, even laying off the booze in a move of solidarity. Kennedy says he doesn’t take risks, instead he rigs the game. “What else good is the stock market for?” he laughs. The two men dance around trying to come to an understanding of how they will work together when prohibition is repealed. Once all the cards are on the table they butt heads, because the teetotaling Kennedy isn’t easy to win over. In fact, he’s a condescending prick, and Nucky resents him for being a cleaner version of himself; just another gangster, but one that assumes he’s above board. Still, Nucky seethes with envy, wishing he was that respectable version of the modern day gangster.

Meanwhile, the seeds are sewn for a reunion between Nucky and his estranged wife Margaret Schroeder (Kelly Macdonald). She’d been working in an investment firm for the gangster Arnold Rothstein (Michael Stuhlbarg) for years. Rothstein died in 1927, but it appears corrupt members of the firm siphoned his money once they learned of his identity. Margaret signed the checks unaware what was happening and now it looks like the firm wants her to be the scapegoat for it all. She pays a visit to Rothstein’s widow in hopes of explaining it all. But Carolyn Rothstein (Shae D’lyn) is having none of it. She knows her departed husband paid for Margaret’s apartment and assume she was one of his mistresses. Eventually it becomes immaterial whether she was or wasn’t (she wasn’t), Mrs. Rothstein knows who Margaret really is and insists she is coming for Nucky Thompson’s wealth. Obviously, Margaret and Nucky have been estranged for years, but there’s no explaining this to the angry Carolyn.

Nucky wakes up in a daze in the couch, dreaming of Mabel, his first crush and eventual wife. “Is that you, Mabel?” A bleary eyed Nucky asks? Unfortunately not, it’s Margaret, sitting in the shadows, surely here to explain the mess that has come to her door. It’s been more than seven years since they’ve seen each other, but Nucky’s half smile suggests she’s a sight for sore eyes.

A slower episode than last, “Boardwalk Empire” is getting back into a familiar groove and rhythm, and I’m again reminded why this show is worthwhile. For one, it just doesn’t deign to spoonfeed you any information. You either catch it or you don’t and really its full of rewards for the hardcore viewer who’s paying close attention. But I also wonder if the show has been too smart for its own good and this is why it’s lost viewers. Regardless, the storytelling is intelligent, subtle and elegant, even when the pace is leisurely.

– Miss Nellie Bly sends Nucky a letter. Who? Whoever she is, she jars Nucky’s memory, and we’ll likely find out next episode what this correspondence is about. It may in fact be one of Nucky’s grown-up kids as an adult, likely his daughter Emily, but possibly Teddy.

– Mickey Doyle (Paul Sparks) is still around too, running Nucky’s burlesque house—not as classy as the old days, but times have changed—and acting as a lieutenant in the liquor business. Tasked to hire desperate men to unload liquor boxes, Doyle hires a young teenager with moxy and spirit and this surely won’t be the last we’ll see him. 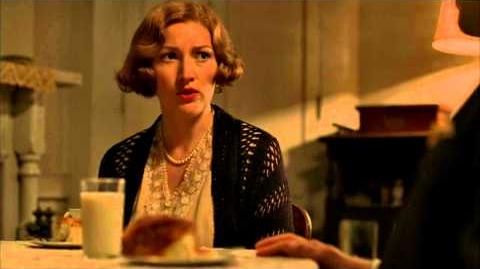 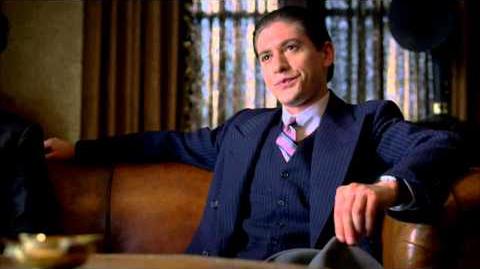 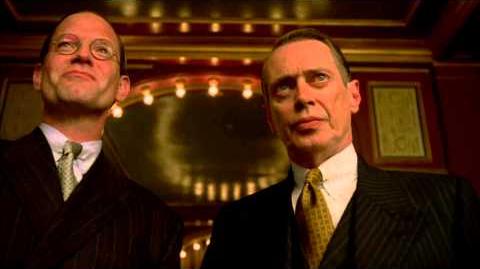