"You'd Be Surprised" is the fifth episode of the third season of Boardwalk Empire, and the 29th episode overall. It was written by co-executive producers Diane Frolov & Andrew Schneider and directed by executive producer Tim Van Patten. It premiered on 14 October 2012. The episode takes place in February, 1923.

Arnold Rothstein visits Atlantic City to vent about Nucky Thompson's failure to deliver his liquor shipments. Nucky asks Rothstein to side with him against Gyp Rosetti but Rothstein is reluctant to provoke Joe Masseria. Rothstein meets with Gyp, who offers to supply him in Nucky's place. Rothstein takes careful note when Gyp orders a subscription from a passing paper boy, later having Benjamin Siegel pretend to deliver a paper to gain access to Gyp. Siegel tries to kill Rosetti but the hit goes awry, with four left dead but none of them Rosetti.

Nucky remains fixated on Billie Kent and takes an interest in her career. He is disappointed with rehearsals of her play "The Naughty Virgin" and has Chalky White strongarm Eddie Cantor into getting involved. Margaret stumbles across Nucky buying Billie clothes at La Belle Femme and stops him from seeing her children. She continues to struggle to gather interest in the women's health class but takes the lead in delivering a lesson when Dr. Douglas Mason is unavailable. Gillian Darmody is given a choice by her attorney Leander Cephas Whitlock: accept Jimmy's death in order to inherit the estate and take a legitimate loan or modify her business practices to maximize profit. She opts for the latter, maintaining her denial about Jimmy's death. Agent Coughlin tries to contact Nelson Van Alden and, fearing the worst, Nelson confesses his fugitive status to Sigrid. When Coughlin visits, Van Alden is relieved that he only wants to complain about an iron he bought but Sigrid misunderstands and attacks him. She helps Van Alden kill the wounded agent and he then turns to Dean O'Banion for assistance in disposing of the body.

Harry Daugherty's leadership of the attorney generals office continues to be questioned and Senator Walter Edge questions Daugherty's enemy Andrew W. Mellon before a senate committee. Special investigator Gaston Means keeps a close eye on the proceedings while Department of Justice Aide Jess Smith begins to crack under the pressure. Means recommends that Daugherty arrest a major bootlegger to deflect the criticism.

After venting with Nucky about his liquor travails, Rothstein sends Gyp an unequivocal message in Tabor Heights. In Washington, Gaston Means sees opportunity in a Senate investigation of Harry Daugherty and the Justice Department. Billie gets a new co-star to revive her faltering show, and Van Alden and Sigrid receive an unexpected visitor. Gillian worries about keeping her business afloat in Jimmy's absence, while Margaret has awkward moments at the hospital and, later, at Madam Jeunet's. (Showtime Australia)

Arnold Rothstein travels to Atlantic City to reprimand Nucky Thompson for his various failings as a supplier. Nucky has his brother Eli Thompson tell Rothstein about the massacre Gyp Rosetti orchestrated for their last convoy. Eli's deference does not go unnoticed and Nucky thanks him for his time. Rothstein asks for privacy and then lays into Nucky for his inattention. He blames the problems on Nucky's relationship with Billie Kent. Nucky rises to the argument and the two shout at each other as Charlie Luciano and Owen Sleater wait in the lobby.

Nucky goes home and lies to Margaret Thompson that he is heading out of town on business. She is suspicious of his motives for telling her and worries that she is going to need a bodyguard again. Nucky attends a rehearsal of Billie's play "The Naughty Virgin", which is running warm up performances in Atlantic City before a planned run on Broadway. The musical comedy is flat and Nucky is unimpressed with Billie's co-star and jealous of her choreographer. Eddie Cantor reassures Nucky that Billie is fine and that it is a difficult business. That evening Billie confides in Nucky that her father often called her useless and that she fears the play is about to be canceled.

Margaret attends the first evening class for her women's health group. The few students in attendance are grateful for the instruction but Sister Agnes thinks the classes are not worth continuing to such a small group. Margaret prepares a new batch of fliers and hands them out to disinterested women on the boardwalk. She goes to La Belle Femme to leave a stack of fliers with Isabelle Jeunet and runs into Nucky buying a dress for Billie.

Nucky comes to apologize for showing bad form but Margaret is unforgiving. She prevents him from seeing her children and he warns her that she needs to consider the practicalities of her situation. Dr. Douglas Mason is called to an emergency and is unable to deliver the next class. Margaret steps in to teach in his place, over the protestations of the nun.

Nucky takes it upon himself to rescue Billie's play and lunches with Eddie to try to convince him to take over the lead role. Eddie protests that he is under contract on another project and makes a hasty exit. Nucky has Chalky White and Dunn Purnsley strong-arm Eddie into taking the role.

Nelson Van Alden is called in to see his boss Scotty Gulliver. Gulliver questions him about his employment history and chastises him for not properly filling out his tax return. He also gives Van Alden a card left by Prohibition Agent Elliott Coughlin. Van Alden is concerned when Coughlin comes to his apartment that evening. Fearing that his status as a fugitive is about to be exposed he attempts to confess to Sigrid. She cuts him off, reassuring him that she knows he is on the run for a crime he did not commit. The next day Van Alden arrives home to find Coughlin already there talking to Sigrid. He sits down to talk to the agent, who is actually there to complain about being sold a faulty iron. Sigrid misconstrues the situation and hits Coughlin in the head with a meat tenderiser. The agent falls to the ground semi conscious and Van Alden suffocates him as Sigrid holds him down. Van Alden approaches Dean O'Banion for help disposing of the body.

Gillian Darmody summons her attorney Leander Cephas Whitlock to The Artemis Club to advise her on getting a loan for repairs to the building. He tells her that her outgoings exceed her income and she cannot obtain credit without getting the title on the building in her name. He urges her to have Jimmy Darmody declared dead so that she can claim The Commodore's estate in Tommy Darmody's name. She refuses to face up to the reality of Jimmy's death and instead lifts her policy against her girls shilling for custom on the street to raise her income. She writes a letter to Jimmy, urging him to come home.

Treasury Secretary Andrew W. Mellon is called to testify before a senate committee investigating corruption in the Department of Justice. Senator Walter Edge leads the panel and Mellon is unreserved in his criticism of Attorney General Harry Daugherty. Gaston Means bribes Edge's aide Harvey to keep him informed on the proceedings. He relays the information to Jess Smith. Smith panics at the prospect of being indicted for corruption. Means tells him that they can deflect the criticism by making a high profile bootlegging arrest but Smith is terrified of the consequences of acting against the criminals they have gone into business with.

Rothstein stops in Tabor Heights to meet with Gyp, pretending that he is seeking a new supplier. He notes Gyp ordering the local paper delivered to his hotel room each evening. Rothstein hires Benjamin Siegel and Meyer Lansky to kill Rosetti. Siegel poses as a paper boy to get access to Gyp inside the Kinneret Lodge. He shoots the guard on the door and breaks into Gyp's room while he is with Roberta. Gyp callously uses his lover as a human shield and Siegel shoots and kills her. Gyp is able to grab his gun and return fire, driving Siegel off. Siegel flees the building, killing another of Gyp's men and the real paper boy on his way out. Gyp accidentally shoots his lieutenant Tonino as he pursues Siegel. Siegel jumps into a waiting getaway car and drives off, leaving a blood drenched Gyp to survey the carnage.

Nucky attends Eddie's first rehearsal. Billie is quizzical about how Nucky saved the show. Eddie pointedly asks her if she has heard of Lucy Danziger and then tells her that the next girl will not know who she is either. Nucky watches them duet from the stalls and Owen arrives with bad news; 4 are dead in Tabor Heights but none of them are Gyp. 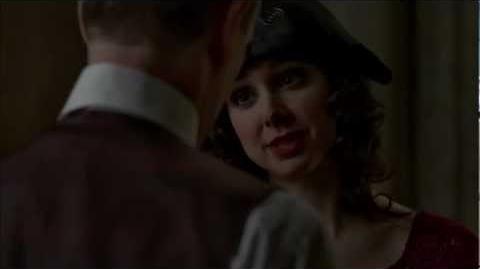